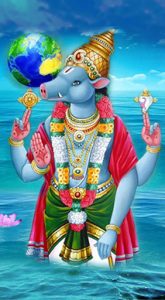 After PRALAYA, it was the beginning of a new KALPA. BRAHMA, the Creator, was busy in the work of creation. BHOOMADEVI (Mother Earth) was being tossed about in the turbulent waves; ultimately she was pushed to the bottom of the ocean. Brahma was troubled. He had to bring the Earth up, out of the deluge. He meditated on Lord VISHNU. "O Lord, please come to my rescue and recover Mother Earth" Brahma prayed. As He prayed to the Lord, a tiny white boar, smaller than his thumb, emerged out on one of his nostrils. Brahma was amazed and gazed at it. Instantly it grew and grew and became larger than an elephant. Brahma was wondering whether it was not Lord Vishnu himself in that form. The boar was yet growing in size and attained a colossal form. Brahma was convinced that it was Lord Vishnu himself.

With a terrifying mighty roar, the Boar leaped into the air, pierced the clouds and came down diving into the ocean. It raced to the bottom of the ocean in search of the Earth. Searching tirelessly, it found Mother Earth at the other end of the ocean-bed. Digging his tusk into the ocean-bed, the Boar lifted BHOOMIDEVI on to it; and proceeded to rise to the surface.

An ASURA by name HIRANYAKSHA had become mighty and powerful after a rigourous penence to BRAHMA from whom he had obtained boons. He went about challenging, threatening and conquering the Devas. Unable to face him, Devas had to go into hiding. Hiranyakasha, goaded by the arrogance of power, was spoiling for fight. He went up to VARUNA, lord of the waters and Guardian of Hydrosphere, and in pretended humility, implored him for a fight. Varuna knew that he was not equal to the Asura in prowess and the Asura was only mocking at him by acting humble. He controlled his anger and replied the Asura, " I am too old to fight and I have given up fighting. Not all can be equal to you. Only Lord Vishnu will be a match for you. Please go to him and engage him in fight." Read more

Coming across Sage Narada the Asura learnt that Vishnu was rising to the surface from the ocean-bed carrying BHOOMADEVI on his tusk - in the form of a boar - immediately he charged into the ocean and spotted the Lord in the act of rescuing the earth. "Hey beast, leave Bhoomadevi alone and come and fight me" shouted the Asura, chasing the animal. The Lord ignored his taunts as he had to, first of all, take BHOOMADEVI out of the ocean and put her to safety. As soon as He reached the surface of the ocean, the Lord placed her gently on it and blessed her. "May you fit into the Divine order" blessed the Lord.

He now turned to Hiranyaksha and responded to his call for a fight. Hiranyaksha became furious and attacked the animal. The boar cleverly warded off his attack and counter-attacked with a mace. They were thus engaged in a furious fight, when Brahma appeared on the scene. "Twilight is approaching and in an hour he will become more powerfull and formidable. So, slay him quickly and rid us all of his menace" Brahma exhorted the boar. Hearing what Brahma told the animal, Hiranyaksha, in a fit of fury, hurled his mace at the animal. The animal caught hold of the mace as if it were a toy. Hiranyaksha now started hitting the animal on its chest with his powerful fists. The Boar in turn hit the Asura behind his ears. Hiranyaksha reeled and fell down dead.