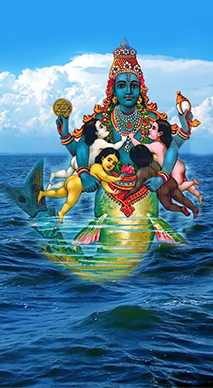 All glories to you, O Lord of the Universe, who took the form of a fish. When the sacred hyms of the Vedas were lost in the waters of universaldevastation, you swam like a boat in that vast ocean to resue them. --------Poet Jayadeva

The VEDAS, with the aid of which, BRAHMA, the creator God, performs his role, happened to slip out of his possession at a moment of his respite. An ASURA (Enemy of God) who was alert observed it and instantly devoured them. But, Vishnu, the preserver-God, was watching this. Since PRALAYA - Dissolution - was to follow soon, the VEDAS would be lost for the next spell of Creation, unless they were retrieved.

As God was wondering what was to be done, he noticed Sage Satyavrata, who was doing penance subsisting on water alone, making the ritual offering of water of God. God immediately assumed the form of a Fish. As satyavrata scooped water from the flowing river, he espied a tiny fish in the water he had scooped. When he tried to put it back into the river, the Fish entered the sage not to do so as it would be eaten up by the big fishes in the river. Satyavrata took pity and took it into his KAMANDALU and went back to his hermitage. Overnight, the Fish grew too big to be in the Kamandalu.

The next morning when the sage looked it up, the Fish requested him to remove him to a larger vessel. Satyavarta did so but soon the fish became too big for the larger vessel also. Addressing the Sage, the Fish said that he should protect him and find a suitable living space for it. Satyavarta then emptied the vessel into a large pond near the hermitage along with the Fish. But, in no time the Fish grew as large as the pond and filled it. Then the Fish exhorted the Sage to take it to a large and deep lake. Although Satyavarta took it to several lakes, one larger than the other, the Fish kept growing and bigger and bigger. It went on asking for larger and larger living space.

Sathyavarata got vexed and decided to put it into the ocean. While he reached the ocean, the Fish addressed him thus: "oh Sage, do not put me into the ocean, I am sure to be swallowed by the gigantic creature there." Satyavarta became suspicious now. He was despairing to know how a fish could in a day grow so big as the largest lake and still find it not big enough for it to live there. In a flash, he realised that it was Lord Vishnu in the form of Fish. Satyavrata immediately prostrated before the Fish and prayed to be told why God had appeared in the form of Fish. The Lord told his devotee, "Just a week from now, the ocean will rise and inundate the entire Universe for the dissolution of creation. At that time you will see a spacious boat approaching you. Do collect all the seeds, plants and animals required for the next spell of creation and get into the boat and await me. Take VASUKI, the kind of Serpents, also with you. The SAPTHA RISHIS (seven Sages) will also be with you". Read more

The Fish left for fulfilling its mission. Hayagriva saw the gigantic fish approaching him and was overtaken by fear. He held the VEDAS tightly in his mouth. But soon the Divine Fish slew him and recovered the VEDAS and restored them to BRAHMA for him to resume the function of CREATION at the appropriate time.

As foretold by the DIVINE FISH, PRALAYA (deluge) set in and on the turbulent waters, a boat appeared. Sage Satyavrata, the Saptha Rishis and all the living creatures found haven in the boat. The Fish in the colour of gold and now with a horn came by and ordered that the boat be tied to its horn using VASUKI as a rope. While the boat floated safely on the rising and enveloping waters, VISHNU taught the Rishis the highest form of Truth. This collection of truth has come to us in the form of MATSYA PURANA.

Lord VISHNU in this manner saved his True Devotees from dissolution so as to hand down divine knowledge and saved the VEDAS from destruction so as ensure CREATION after the DISSOLUTION.