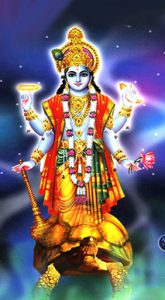 In the aftermath of a curse by Sage Durvasa, Devas and and their king, INDRA, had become inglorious and powerless. It was as though they had been abandoned by Gods. They remained engulfed in darkness.

Their eternal foes, ASURAS, were quick to seize the opportunity and conquer the emaciated Devas. Indra was dethroned and driven out along with his subjects. Feeling helpless and utterly humiliated, they went to BRAHMA, the Creator, and sought his help, explaining their predicament. Brahma took them to the abode of VISHNU, since it is the latter who preserves the order of the universe. Indra and Devas surrendered to VISHNU and prayed for their redemption.

Lord VISHNU told them that the only way out for them was to secure the NECTAR of IMMORTALITY: and for that, they would have to strive immensely and (a) cast all kinds of plants, herbs, grassed and creepers into the Ocean of Milk, and (b) churn the ocean using Mount MANDARA as a churn-staff and VASUKI, the king of the serpents, as the rope for turning it. But how to shift the Mount, was the big question. VISHNU suggested that they make peace with their cousins and enemies and enlist their cooperation and help, and achieve their purpose. At the same time HE cautioned them not to covet any of the things that come out of the ocean and not to get angry even if those things were forcibly taken posession of by the ASURAS. HE assured them, however, that he would see to it that the ASURAS did not enjoy any portion of the NECTAR, no matter how much they toiled.

While BRAHMA returned to his own abode, INDRA and the Devas made their journey to the court of Bali, king of the ASURAS. On seeing INDRA and the Devas approaching them, King Bali's followers were furious and about to attack and capture them. However, Bali counselled patience suggesting that they might after all be coming with a proposal which might benefit the Asuras as well. Accordingly, King Bali received Indra and the Devas with due honours. INDRA told the King why they had come to him and requested him to extend his help for the venture from which all of them could benefit.

Bali and his Chiefs agreed to the proposal. Asuras and Devas made peace between themselves. Indra and Bali rallied their forces and began the task of lifting Mount Mandara. Uprooting the mount, they set out carrying it to the seashore. Even before they had carried it halfway, the forces found themselves unable to carry it any longer; and soon the mount came crashing on them. Large numbers of Devas and Asuras lay dead under it. Indra was heartbroken. While he was still thinking of appealing to Lord Vishnu, God appeared on the spot on his Vahana - Garuda - and by His mere glance revived the dead; and placing Mount Mandara on Garuda's back, He flew to the seashore, where the Devas and Asuras too followed. After the mount was safely brought down, Lord Vishnu asked Garuda to withdraw from the scene, lest VASUKI should keep himself away for fear of his natural enemy ( Garuda ). When he saw that Garuda was no longer there, VASUKI, arrived on the scene obeying the summons of VISHNU. The Lord assured the Serpent King that he too would get a share of the Nectar and that the rugged surface of the mount would not hurt him. Vasuki, in tune with his role, allowed himself to be wound around MANDARA as the churning rope. Read more

There was only one who could do it and it was Lord Vishnu. Assuming the form of a huge Tortoise(KURMA), the Lord plunged into the ocean and came up with the mountain on his back. The Lord had come to their rescue again. The Devas and Asuras lost no time to get back to their job of churning. However much they churned nothing came out of their efforts. They became weary and depressed. Lord intervened once more and did the churning too.

With the churning in full steam, the concentrate of the impurities of the ocean threw up the deadly poison, HALAHALA. The poisonous fumes choked the Devas and Asuras. Not knowing what to do, Devas ran to Lord SHIVA collected it in his palm and swallowed it. As soon as the poison was removed, the Devas and Asuras resumed churning. As they churned and churned many precious things came to the surface but not the Nectar.

Suddenly a being emerged with a jar in his arms. It was Dhanwantari with the jar of the nectar of IMMORTALLITY. The Asuras were quick to surmise that it was Nectar in the jar. They rushed towards Dhanwantari and snatched the jar from him and started quarrelling for getting the Nectar first.

Devas watched the Asuras each one of whom was trying to grab the nectar for himself before everyone else. They were annoyed but kept their cool remembering the Lord's warning that they should not covet any precious thing coming out of the ocean or become angry over anything. Lord Vishnu appeared before them and approved their conduct and told them that He will charm the Asuras with the powers and secure the nectar from them.

The Asuras already stood divided over partaking the Nectar. They now noticed a woman, who was the most beautiful that they had ever seen, approaching them. They were all struck by the dazzling beauty of the woman and they turned to enjoying the unrivalled beauty of the form, the limbs, the features and what not, of this enchanting figure. They didn't however know that it was none other than Lord Vishnu who had descended before them in that bewitching form, in the form of MOHINI and He had a purpose in assuming the form.

In a state of infatuation, the Asuras gifted the Jar of Nectar to this beautiful woman and prayed to her to distribute it among them and bring peace and amity among themselves. Mohini condescended to do it but on condition that they would not question her actions, whatever they might be. The Asuras, not knowing who she was and totally under the spell of her charm, readily agreed to her condition. "Go bathe and assemble yourselves in one row with your cousins, the Devas in another row." ordered Mohini. When they were all assembled in two separate rows, Mohini began serving the Nectar to the Devas first. The Asuras were uneasy but chose to keep quiet as they had promised not to question her actions. By the time the last of the Devas in their row had been served, Mohini had made sure that there was no Nectar left to be served to the Asuras. Nectar of immortality would only cause untold harm and destruction, if granted to aggressive and unscrupulous beings like the Asuras.

Then to the amazement of Asuras, Lord Vishnu assumed his own form and the Asuras realised that it was Vishnu who had appeared before them as Mohini. They demanded of Vishnu their share of Nectar; but they got only a smile from him in return. Mounting GARUDA, Lord Vishnu flew away from them.

The Asuras felt cheated and immediately started attacking the Devas. With God on their side and with the Nectar inside, the Devas had regained their original splendour and strength and they were able to conquer the Asuras, who had to flee before the might of Devas. On the advice of Lord BRAHMA, conveyed through Sage Narada, INDRA called off the hostilities and returned to his realms with the Devas.

Lord VISHNU in this manner saved his True Devotees from dissolution so as to hand down divine knowledge and saved the VEDAS from destruction so as ensure CREATION after the DISSOLUTION.
--Retold by P.H. Ramamoorthy